You are here: Home » Reasons for Hope » Achievements and Milestones » Camptothecin

CHRISTUS Stehlin Foundation has become an international leader in the development and clinical (human) study of a remarkable family of anticancer compounds, the camptothecins.

More than 40 years ago, scientists discovered that extracts from the bark and leaves of a tree native to China, Camptotheca acuminata, had potent anticancer activity when tested in mice on a strain of leukemia.

Encouraged by the broad scope of animal antitumor activity of the active substance, designated camptothecin (CPT), a decision was made by the National Cancer Institute to conduct clinical (human) trials on the compound’s sodium salt. The drug was found to have some anticancer activity but, as administered, was too toxic to be of practical use.

Interest in CPT and its analogs remained low until 1985, when scientists discovered the mechanism by which camptothecin worked. CPT inhibits the enzyme isomerase I in a tumor cell’s nucleus. Since the enzyme affects DNA activity such as replication, transcription, and recombination, researchers immediately recognized the possibility for clinical use of camptothecin as an anticancer agent.

In 1988, in collaboration with scientists from Johns Hopkins and New York Universities, CPT derivatives were tested in the Stehlin laboratory against several types of human cancers transplanted in immune-suppressed mice. Remarkably, these compounds proved to be both more active and more effective than any chemotherapeutic agent (conventional or experimental) Stehlin researchers had previously studied.

The Foundation conducted extensive research on the toxicity, mechanisms of action, and biochemical properties of the new compounds. After reviewing the results of those studies, the U.S. Food and Drug Administration authorized the Foundation to begin clinical (human) trials. Two drugs, the original camptothecin molecule and 9-Nitro Camptothecin (9NC), developed in the Stehlin labs, were administered to patients with very advanced cancers. 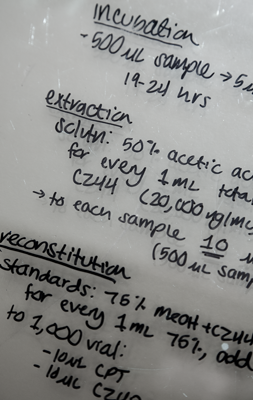 Even though the patients enrolled in the studies had failed conventional treatments (e.g.,  surgery, radiation and chemotherapy), Foundation physicians and scientists were extremely encouraged with favorable responses in individuals with breast, prostate, pancreas, and ovarian tumors, as well as patients with leukemia, lymphomas, and malignant melanoma. Toxicities associated with the compounds were manageable.

An additional advantage of the Camptothecin family of drugs is that they can be administered orally, on an outpatient basis. This is less expensive (and patients are more likely to follow the program) than drugs administered intravenously, either in a hospital or physician’s office.

Phase III clinical trials were conducted using 9NC. The CPT derivative had demonstrated lower toxicity than the mother compound. The studies concentrated on pancreatic tumors, since they demonstrated a heightened sensitivity to 9NC in earlier tests.

Building on the Foundation

Based on the initial results with 9NC, CHRISTUS Stehlin Foundation applied to the FDA for “orphan drug” designation. Approval was granted in 1996, giving the Foundation exclusive rights to market 9NC in the United States.

Learn more about the development of CZ48 and current research using camptothecin.