Desmoplastic small round cell tumors (DSRCT) are soft tissue sarcomas that primarily occur as masses in the abdomen. Patients are adolescents and young adults, predominantly male. Even rarer (but occurring) in females, DSRCT is often mistaken for ovarian cancer. 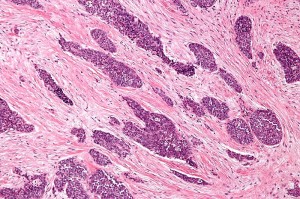 DSRCT is a relatively “new” cancer (first described in 1989). It is frequently misdiagnosed, because most patients are young and otherwise healthy and because the disease has few early warning signals. Tumors often grow and spread uninhibited within the abdominal cavity before detection. There is no known point of origin. More than 40 percent of patients have distant metastases at the time of diagnosis, mostly located in the liver, lungs, bone marrow, and lymph nodes. The prognosis for those affected is poor, with a five-year survival of about 15 percent.

On a molecular level, the hallmark of DSRCT is a reciprocal translocation between two genes - EWS and WT1. Translocations occur when two chromosomes swap arms due to an error in DNA replication or repair. The swap creates a fusion protein that, in turn, initiates the production of antigens important to the formation of tumors – PDGF, TALLA-1, and interleukin-2/15 receptor.

Disease-defining translocations, such as the t(11;22)(p13:q12) translocation in DSRCT, are common in sarcomas. Generally, the fusion genes created at these sites are the initiating events that cause the cancers. That’s why it is so important to study them. Understanding what they do to cause tumors is central to developing mechanisms to prevent the process.

No standard treatment protocol exists. All current modalities (surgery, radiation, chemotherapy) are highly toxic, have numerous side effects, and are not particularly effective. Aggressive surgical resection of the tumors, however, has been shown to be a major factor in determining the length of patient survival.

DSRCTs often are sensitive to chemotherapy, but treated patients invariably relapse. One theory behind the relapse is that unidentified DSRCT stem cells develop resistance and regenerate the tumor after it has been reduced by treatment. Identification of such stem cells should stimulate new molecularly-targeted therapies.

Further advances in the treatment of DSRCT probably will involve targeting the cellular regulatory mechanism – the products that induce DSRC tumors.

Other avenues for research include developing immunotherapies that target DSRCT-specific antigens. In 2003, two antigens expressed on the surface of DSRCT were identified. Targeted immunotherapy using monoclonal antibodies directed at these antigens has the advantage of decreased toxicity, because the antibodies have a limited affect on most normal tissues.

The Foundation’s initial interest in DSRCT resulted from meeting and working with Patrick Scranton, a remarkable DSRCT patient who lost his fight with the disease in 2005. With the support of Patrick’s family, the Foundation initiated research into DSRCT, and its progress has been documented on a website initially created by Patrick to educate and provide referrals to other DSRCT patients – http://www.DSRCT.com. 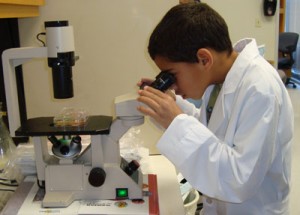 In late October 2012, the Stehlin lab was visited by 11 year old Cole Owens, who was celebrating the six year anniversary of his DSRCT diagnosis. No one who reads the story of Cole’s cancer treatment fails to be impressed by what this remarkable young man has been through since the age of five. But most remarkable to the scientists at CHRISTUS Stehlin is Cole’s seemingly unshakable positivity (and the fact that Cole’s disease has not progressed since 2011). The courage, determination, and hope displayed by Cole Owens and other DSRCT patients and their families are a continuing inspiration to Stehlin researchers and staff.

CHRISTUS Stehlin Foundation has been collecting DSRCT specimens for several years, and work has begun to build a broad library of DSRC tumor cell lines and xenografts (human DSRC tumors transplanted into immuno-suppressed mice) for testing. The project has a budget of almost $1 million, and depending on the availability of new tumor specimens, is expected to continue through 2014. The goals of the research are to create the cellular materials and model systems required to study the biological behavior of DSRCT outside the patient and to discover and test new modalities of treatment. As new cell lines are developed, Foundation researchers will make them available to the global cancer research community.

Currently, the Foundation has 17 DSRC tumors in 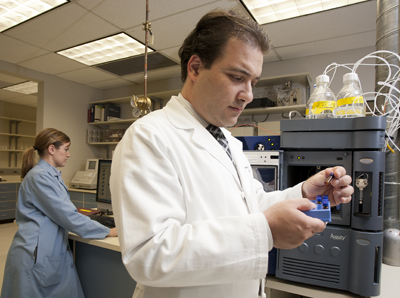 storage; nine are growing in tissue culture and eight have been established as xenografts. Dr. Constantine Markides is leading the Foundation’s research into treatment of DSRCT using hyperthermia and chemotherapy. Laboratory testing has begun using the Foundation’s anticancer drug CZ48. So far, all DSRC tumor cells have been highly sensitive to CZ48, a cause for optimism.

With access to cell lines that represent a broad collection of DSRC tumors, scientists can develop better diagnostic tools, test the disease’s vulnerability to new drugs, create novel therapies, and one day deliver highly-personalized treatment to patients. This and subsequent research may provide answers not only for DSRCT, but for other small cell sarcomas that affect hundreds of children and families each year.

If you or a family member are affected by DSRCT and are interested in participating in the Foundation’s research, or you have questions about the tumor collection program, please contact Doug Coil, Deputy Laboratory Supervisor, 713-659-1336.

You can support the Foundation’s sarcoma research by donating online today or by contacting Foundation president Bobby Anderson.

“Dr. Stehlin has been right about cancer for more than 40 years . . . He achieved his remarkable success by carefully observing the behavior of cancer. He found order where others had only seen chaos. He found rules where others said there were no rules. And he spared hundreds of patients the disfiguring consequences of radical surgery.”