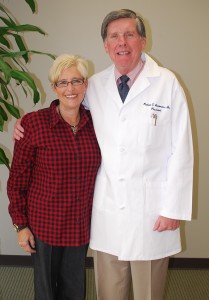 In Luci Bonneau, breast cancer encountered the spirit of a woman who didn’t like to lose, a woman who discovered a new passion in the midst of a fight for her life. Luci was a talented bowler whose team broke a state record just months before she succumbed to breast cancer. “She kept bowling all the way to the end,” says former PWBA star Carol Norman, who won a PWBA regional event with Luci not long before that final tournament in Beaumont.

“Luci told me, ‘If I survive, we’ll put on a bowling tournament to raise money for breast cancer research,’” explained Donna Conners. But as with many of the 200,000 women diagnosed each year, Luci Bonneau lost her fight with breast cancer. Thanks to Donna and Luci’s many other friends in the bowling community, the disease that took this champion didn’t end her dream.

Today the Luci Bonneau Memorial Striking Against Breast Cancer Mixed Doubles Tournament attracts some of the country’s most talented bowlers and tournament administrators. It has become one of the most anticipated events on their calendars. As the tournament’s chosen charity, CHRISTUS Stehlin Foundation is honored to benefit from the event honoring this remarkable woman.

(portions excerpted from a feature story at Bowl.com)