You are here: Home » News/Resources » Comparative Oncology: Man’s Best Friend in More Ways than One

Comparative Oncology: Man's Best Friend in More Ways than One

NCI Cancer Bulletin Adapted from an article that originally appeared in CCR Connections.

It was nearly Christmas when Prince, an amiable, 9-year-old Labrador retriever was diagnosed with oral malignant melanoma. His owners, Frances and Peter Way, wanted the best treatment for their companion, so when veterinarians at Colorado State University’s (CSU) Animal Cancer Center suggested a clinical trial, the Ways readily agreed. 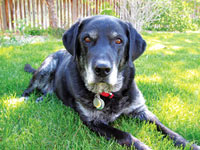 Prince’s melanoma was very aggressive, similar in many ways to human melanoma, and the Animal Cancer Center was part of a consortium, sponsored by the Comparative Oncology Program (COP) in NCI’s Center for Cancer Research (CCR), through which dogs are treated with experimental therapies to prepare for their use in human clinical trials. Prince was treated with a new immunotherapy and achieved a robust response, living for almost a year.

“That’s a lot longer than we think he would have otherwise,” said Peter Way, from Fort Collins, CO. “We were hoping for a cure, but we also knew this would help the science, and I was glad that Prince could participate. It fit his spirit and his attitude; he was a great dog.”

To date, the COP has treated more than 150 dogs over the course of nine clinical trials conducted through the Comparative Oncology Trials Consortium (COTC), a collaborative network of 20 veterinary schools around the country overseen by Dr. Melissa Paoloni. Dr. Chand Khanna conceived of the COP while he was a postdoctoral fellow in CCR, in the lab of Dr. Lee J. Helman.

At the time, Dr. Khanna was working on tumor metastasis and osteosarcoma, a bone cancer that occurs in pediatric patients and is also common in dogs. “It became clear to me that there would be great value in including pet animals with cancer within our CCR studies,” he said. “There are very few human cancers that don’t also occur naturally in pet animals. To me, not learning from their cancers to help inform human clinical trials seemed like a lost opportunity.”

In 2004, with backing from Dr. Helman and Dr. Carl Barrett, then chief of CCR’s Pediatric Oncology Branch and CCR’s director, respectively, Dr. Khanna established the COP. Its mission, Dr. Khanna explained, is to improve the assessment of novel treatments for humans by treating pet animals—primarily dogs with naturally occurring cancers—while also trying to give these animals better quality of life by offering them the benefit of cutting-edge research and experimental therapies.

“The ultimate goal was for NCI to engage the drug development community and to lead a consortium of veterinary schools in a program to supply clinical research results that might accelerate new human treatments, and simultaneously help pet animals with cancer,” Dr. Khanna said.

On a practical level, the compressed life span of a dog and the more rapid course of cancer progression make it easier for scientists to evaluate the benefit of novel cancer therapy in a short period of time. Repeat biopsies are often easier to perform in dogs than they are in people, making canine pre- and post-dosing tissue studies to investigate drug-target interactions feasible.

Additionally, thanks to the public release of the canine genome sequence in 2005, scientists can now understand the molecular changes that are associated with a treatment response and a treatment failure. And finally, the COTC studies spontaneously occurring tumors in pet dogs, which are far more similar to human cancer than tumors induced artificially in lab mice.

“It’s also important to note that the COTC provides cutting-edge cancer treatment to pets whose owners might not otherwise be able to help them,” said Dr. Paoloni. “It can cost thousands of dollars to pay for cancer therapy in a dog, and unfortunately that puts it out of reach for many families. So, our efforts can help both human and veterinary cancer patients.”

Prince was enrolled in a study of two immunocytokine fusion proteins in tumor-bearing dogs, which aimed to define optimal doses and early indications of antitumor activity. “He’d get a monthly injection and then periodic blood work,” said Dr. Susan Lana, chief of Clinical Oncology at Colorado State University Veterinary Teaching Hospital and Animal Cancer Center. “And we would follow the tumor as he progressed. Prince was a good candidate because, although his tumor was large, he was healthy in all other respects.”

Led by Dr. Paoloni, COTC’s first study investigated the safety and effectiveness of using a virus (or phage) to deliver tumor necrosis factor (TNF)—an inflammatory cytokine—directly into tumor blood vessels by intravenous dosing. TNF-alpha was already approved for local administration in human melanoma and soft tissue sarcoma, but with systemic dosing, human patients ran a high risk of hypotension and other cardiovascular reactions.

The phage was designed to avoid that problem by targeting a molecular marker on tumor blood vessels. Thus, the phage would theoretically spare normal vasculature and avoid cardiovascular and other toxicities. However, it was not practical to test the phage in healthy animals without cancer because animals lacking the tumor marker would simply excrete the phage.

During the trial, COTC scientists at five participating universities tested the phage in a pair of sequential studies. Those data are now being used as a basis for the first phase I clinical trial in humans, Dr. Paoloni noted.

According to Dr. Khanna, many COTC studies strive to predict appropriate human doses of new cancer drugs. “We want to know the relationship between dose and effect at a molecular level.” Furthermore, he said, “There is a great need to answer simple questions that would optimize the success of future human trials. This can be as simple as: When is the best time to conduct a biopsy after dosing to see if a drug did what it was intended to do?”

In a pilot study that is nearing completion, COTC is investigating the feasibility of collecting, processing, and analyzing tissues from multiple sites for molecular markers in under a week, a clinically necessary timeline. According to Dr. Paoloni, this particular study will confirm COTC’s future ability to participate in large-scale, molecular research in personalized medicine.

“It’s crucially important that we can process tissues and generate accurate molecular readouts quickly,” Dr. Paoloni said. “There are many examples of failures that may occur with sample processing in the era of targeted cancer therapy. You cannot underestimate how important it is to be able to collect samples correctly—otherwise the promise of personalized medicine will be difficult to realize.”

Dr. Lana agreed, pointing out that in a “non-clinical world” it might take months to generate that kind of information. “Patients with cancer can’t wait that long,” she said.

This pilot study, Dr. Paoloni said, precedes a trial planned to determine if appropriate therapies can be prescribed on the basis of molecular profiling. Two more trials involve new areas of research for COTC investigators: one aims to determine whether advanced imaging technologies can predict molecular results obtained from tumor biopsies, and a second is focused on discovering the novel mechanism of action for a compound currently in the clinic.

Asked about long term plans for COTC, Dr. Paoloni envisions the future this way: “Essentially, we want to demonstrate the utility of this model so effectively that large pharmaceutical companies begin to develop their own comparative oncology programs. In that case, the COTC’s role would be to oversee and advise on trials run by the pharmaceutical industry.”

The Way family’s opinion is that Prince was an active partner in the COP’s research.

“It wasn’t easy,” they said. “Although we worked with great veterinarians in the program, it was emotionally hard to go through it. But we thought the program could benefit a lot of people, and that was important to us. We all have friends or family who have struggled with or died of cancer, and this was a positive thing for us and our dog to do.”

“The new facility for the CHRISTUS Stehlin Foundation is an appropriate setting for an organization that has made an enormous contribution to the ongoing battle against cancer.”