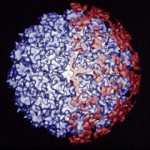 The HPV vaccine contains virus-like particles (blue) that are noninfectious and stimulate the immune system to produce antibodies (red) that can prevent HPV infections. (Credit: NCI)

(NIH, National Cancer Institute, ScienceDaily) In 2009, more than 30,000 people in the U.S. learned they had cancer linked to the human papillomavirus, or HPV. This virus is best known for causing cervical cancer, but it’s also the culprit behind many cancers of the mouth, throat, anus, and genitals. Unlike many forms of cancer, for which we lack the knowledge and tools to prevent, scientists have figured out how to dodge HPV-triggered cancers — by HPV vaccination. Vaccination against HPV thwarts the viruses’ spread, wrecking its ability to jump between people. Wiping out HPV could mean shutting down a big source of cancer cases — more than 3 percent of all diagnoses nationwide.

HPV is a family of more than 150 viruses whose members infect human skin and mucosa, the moist membranes lining the nostrils, mouth, and genital cavities. Scientists name each member, or type of virus, with a number, in order of the viruses’ discovery. Many types are harmless, some cause warts on the hands or feet, and others make fleshy bumps sprout on the genitals. HPV infection is common: More than one-half of all women between the ages of 14 and 59 catch a genital HPV. Though some “low risk” types trigger skin growths, they don’t lead to the unchecked growth typical of cancer. A handful of HPVs, however, do.

Like their less-dangerous relatives, “high-risk” types slip into people’s bodies through tiny tears in the body’s mucosa. Normally, the body sweeps out pesky HPV intruders, but when high-risk HPVs stick around, they can cause cancer. They set up shop in the moist membranes of the anus, genitals, and mouth, shedding new viral spawn as old cells slough off. New viruses hide in these flakes of dead cells and can move from body part to body part — like from the vagina to the anus — or from person to person.

Human cells infected with high-risk HPVs have trouble stopping mistakes made in new cells. The infected cells are like an auto assembly line with no supervisor: New cars roll off the line, but some are missing pieces. Just as production mistakes can make a car ride dangerous, mistakes in infected mucosa can drive a cell toward cancer. In cervical cancers, early signs of the disease show up as precancerous lesions — clumps of cells that can morph into cancer. Because HPV-linked cancers grow slowly, more than 20 years can pass between infection and signs of the disease.

The Pap smear, a test that collects and examines cervical cells, can catch these signs early, giving patients a chance to treat the disease before it tumbles out of control. The test has been valuable for women: From 2000 to 2009, cervical cancer rates in the U.S. dropped. Used with a DNA test to spot high-risk HPVs, traditional Pap smears may be even more powerful. Still, in 2009, nearly 12,000 women were diagnosed with cervical cancer. And rates of other HPV-linked cancers have been creeping up. Nearly 13,000 new cases of mouth and throat, or oropharynx, cancer were reported in 2009; the vast majority was in men. Anal cancer rates are also climbing, especially for black and white adults. Unlike cervical cancer, there is no approved screen for other HPV-linked cancers. But there may be a way to prevent them — without the need to screen first for early lesions — and to trim cervical cancer rates even further.

How does the HPV vaccine work?

Both vaccines prevent people from getting HPV infections by helping the body stockpile a medley of cellular defenses. The vaccines give the body a sneak peek at HPV — like flashing a picture of the virus’s face on America’s Most Wanted. Because the vaccines mimic HPV’s shell — a sturdy coat that wraps around the virus’s DNA — they can show the body what to look for without exposing it to harmful viral genes. When HPV knocks on the skin’s door, a vaccinated person’s immune system can answer with protections ready.

When HPV infects an unvaccinated person, the immune system stays alert in case the virus drops in again. The body’s defenses are strong — they’ll usually snuff out new infections. But the defenses of a vaccinated person can be more than 1000 times stronger. This means the vaccines’ protection could last a long time without the need for a booster shot — perhaps even a lifetime.

How effective is the HPV vaccine?

In 2010, fewer than one in three U.S. teenage girls had received the full three-dose series. The numbers are even more modest for teenage boys. Series completion rates were especially low for Hispanic girls, poor girls, and girls without private insurance. Southern states tended to fare poorly as well. Only 20 percent of girls in Alabama and Mississippi received three doses of the HPV vaccine, compared to 55 percent in Rhode Island and 47 percent in Massachusetts.

Researchers have shown that even two doses may help safeguard against HPV. Now, scientists are working to make a single vaccine that blocks infection by all HPV types — wart-causing and cancer-causing ones alike. Today’s vaccines, however, can prevent infection by two of the most common high-risk HPVs, and may be the first step toward preventing HPV-linked cancers.