You are here: Home » Reasons for Hope » Achievements and Milestones » Nude Mice

An Unequaled Tool in Cancer Research and Therapy

In 1970, Stehlin Foundation Lab Director Dr. Beppino Giovanella recognized the potential of the immuno-deficient “nude mouse” as a model for studying human tumor growth and supression. Nude mice remain the primary model for cancer research in both the Stehlin lab and in other facilities around the world four decades later.

In 1966, a Scottish farmer caught a mouse in his barn. By itself, this was not an altogether rare or even strange occurrence. What made this particular event noteworthy was that this mouse had no hair whatsoever, no fur, no whiskers, nothing. Befuddled, the farmer brought his discovery to the local university, hoping to gain some insight regarding any potential dangers to his crops or livestock. Instead he contributed to the discovery of what has perhaps become one of the most under-appreciated tools in medical research. Everyone has heard of PCR and CAT-scans and gene-arrays are all the rage in today’s research environments. But the nude mouse marries the complexity of a whole, living organism, to the ability to grow and treat an entire milieu of different conditions from parasite infections to cancer in a single model.

The existence of the nude mouse results from the mutation of a single gene. This mutation leads to abnormal keratinization of hair within the animal’s follicles, but more importantly to the malformation of an endocrine and immunoactive organ called the thymus.

Lack of a functioning thymus is what makes the nude mouse so interesting for immunological research, since this abolishes the rejection reflex – the tendency of organisms to immunologically reject foreign tissues introduced into them.

Before the advent of the nude mouse, the study of human tumors was conducted either in naturally occurring or artificially created systems. Artificially created systems, such as tissue culture – growing tumor cells in flasks full of well defined growth media – are the least desirable of the two, since information to be derived from them is limited by their very nature, nevertheless, they are cheap, easy and quick to implement. Naturally occurring systems, such as pharmacologically induced tumors in animals yield far more detailed information, but raise different issues, such as just how applicable results obtained in animals are to human disorders, at the same time that they are difficult to control and expensive to conduct thoroughly.

If neither growing and treating tumor cells in culture nor inducing tumors in animals are suitable model systems for studying treatment of human cancers, a more complete model had to be described. 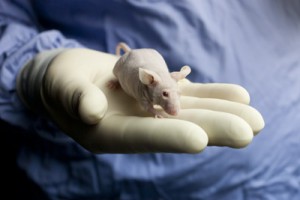 While the nude mouse was first described in 1966, the absence of a thymus in this animal was not shown until 1969. This immediately sparked interest in cancer research and immunology laboratories that had been struggling with inferior growth models. The idea of monitoring the growth of human tumors in a biological system as complex as a living mammal became a reality in the nude mouse.

Since the nude mouse lacks a thymus, it also lacks the T-cell-mediated rejection reflex. Because of this, human cancer cells can be injected into the nude mouse, where they grow into full tumors. The most important aspect of this is that, while the host organism for the tumor is a mouse, albeit nude, the tumor remains human. This is a distinct departure from past animal models that were based on inducing animals to produce their own tumors.

This opened the door to countless possibilities for drug therapy research. Suddenly, we could study the true growth characteristics of human tumors. For the first time, we could personalize care to patients based on how their mouse-bound tumors reacted to available or even experimental pharmaceuticals, without having to experiment blindly on the patient himself. At last, drug regimens that had been considered too risky to try in patients could be tested in a viable system with appreciable results.

In the very beginning, immunologists were the most interested in the potential of the nude mouse. They used the nude mouse to show that in certain parasitological diseases, like trypanosomiasis, death was caused not by the parasite itself, but through the immune response to the parasite. In fact, if a thymus were transplanted into nude animals infected with Trypanosoma, effectively reconstituting a whole animal, that animal would soon die, a victim of its own immune system.

When first described, the nude mouse seemed like a perfect model for studying leprosy, since Mycobacterium leprae (the pathogen that causes leprosy) is inhibited by the action of T-lymphocytes, which are produced by the thymus gland. At the time, however, the animals available for research were too sickly and too short-lived for the research to show any significant difference in the infection rates of the nude mouse as compared to its normal counterpart. Discouraged, leprosy researchers decided that nude mice were not appropriate for their research, until, in 1976, investigators at St. George’s Hospital Medical School in London demonstrated that animals surviving beyond six months showed significant worsening of the induced infection as well as dissemination to multiple distant organs. This discovery sparked a flood of new studies that have, in the intervening years, led to the partial control of this horrible wasting disease.

Researchers at Memorial Sloan-Kettering Cancer Center in New York used the nude mouse as a model for pneumonia caused by Pneumocystis carinii in compromised hosts, such as patients with primary immune-deficiency diseases or cancer patients receiving immune-suppressant therapy. They managed to model it superbly in the nude mouse and because of this it has since been able to be treated much more successfully than before.

Primary interest in the nude mouse was as a model for human cancers. When introduced to the scientific community as a significant improvement on contemporary methods of cancer research, several steps had to be taken to show that results obtained using this new tool were clinically relevant to humans. First, it had to be demonstrated that the tumors growing in the animals were actually human. Differentiating between human and mouse proteins accomplished this. The results in the mouse then had to be shown to mimic those obtained in human studies. This last was demonstrated both at the patient level and at the global level in massive studies undertaken in the early 1980s, showing that 80-85% of tumors grown in the nude mouse responded in the same way as they did in human patients when exposed to some of the major chemotherapeutic agents available at the time.

Since the development of the nude mouse model for cancer studies, we have grown, tracked and treated hundreds of different tumors in the mice. This is important because human tumors grown in the mouse do not cease to be human. They may be growing in a murine host, but the tumor cells are still human and can still be affected by everything that would affect them in the patient’s body. By using these experiments, researchers are able to tailor drug use to the specific needs of their patients. There is a great likelihood that any given patient will respond to a drug or drug combination that successfully treated their tumor after it had been injected into nude mice. In addition non-traditional drug regimens and combinations can be experimented with to provide the highest likelihood of success when treating the patient.

Before new types of drugs are introduced to the market, before they are even brought close to human subjects or patients, they have to be tested on animals. The drugs are tested first for toxicity and subsequently for efficacy against the disease they are designed for. This process is doubly important for cancer chemotherapeutic drugs, since they are, as a rule, much more toxic than most other pharmaceutical agents. For these drugs it is imperative to study the effects on human tumor cells, but the untested pharmaceutical is too dangerous to administer to patients. The answer to this dilemma was found in the nude mouse. Now drug developers were able to test their drugs against actual human tumors while in a system complex enough to approximate human physiology without having to endanger human lives to do so.

Because of its resounding success as a tumor research and treatment tool, some failings of the nude mouse were also uncovered. While some types of tumors, like melanomas, colon and lung cancers, were able to take and grow very easily in the nude mouse, other types were much more difficult to grow: only 6% of tested breast cancers took, while virtually no leukemias were able to proliferate. Lymphomas grew only in the brain of the nude mouse, except for Burkitt lymphomas that grow easily wherever they were implanted.

Another confounding factor in nude mouse cancer research is that the animals may develop spontaneous tumors themselves, mostly late in life. There is about an 8% spontaneous tumor rate in nude animals, mostly lymphomas and pulmonary adenomas, which can mislead researchers investigating human tumors.

Some of these issues have led researchers to try to improve on the paradigm introduced with the nude mouse. A severe combined immune deficiency (SCID) has been genetically introduced to a group of mice, but proved to be a very ‘leaky’ mutation, i.e. it was not inherited in a stable manner and the researchers who used it had to always be on guard to make sure that the animals they were working with were expressing the SCID character.

In the Triple Deficient (TripleD) mouse, three distinct genes have been engineered to give the animal a much greater immune deficiency than the nude mouse, whose immune deficiency is mediated by a single gene. The TripleD mutations are stably inherited from generation to generation of mouse, but, strangely, the percentages of tumors that take in the mouse are no greater than those apparent in the nude mouse. This information would seem to point towards a response other than the rejection reflex mediated by the thymus being responsible for whether tumor cells are able to proliferate in immunologically distinct hosts.

Many laboratories today are targeting immune response genes to produce genetically engineered mice or rats that are deficient in these areas. In this way, specific animals can be produced which would suit the needs of whatever research is being conducted at any given time.

The nude mouse has now become a staple of medical research. Its existence has furthered our understanding of disease processes, such as leprosy, pneumonia, immune deficiency and cancer. Thanks in part to work done in the nude mouse, the 16th International Leprosy Congress announced, “the prospect of eliminating leprosy from every country in the world is tantalizingly close.” Cancer research conducted using the nude mouse has become such a reliable tool that the Food and Drug Administration now requires any prospective oncological drug to supply pre-clinical response data in this model.

And to think that all this began when a farmer brought a strange looking animal into a university laboratory.

- By Beppino C. Giovanella, PhD and Constantine S.A. Markides, PhD, as it appeared in Volume 2, Number 1 of Houston Medicine, 2004.