By age 50, one of every two men worldwide will show microscopic evidence of prostate cancer.  The disease has become the most common cancer diagnosed in American men, representing fully one-third of all newly-diagnosed malignancies. Much research has been dedicated to early detection and to markers that identify indolent versus aggressive forms of the disease. But in order to develop new therapeutic strategies, it’s essential for researchers to understand the cancer’s biology, the mechanism involved in its progression, and its diversity.

Prostate cancer research has been hampered for decades by a shortage of, and a lack of diversity in, tumor cell models. The National Cancer Institute’s Prostate Cancer Progress Review Group urged the development of new cell lines, stating that ”new models will provide methods of testing both chemopreventative and chemotherapeutic agents. Moreover, novel therapeutic protocols, such as gene therapy and immunotherapy, can be tested.” 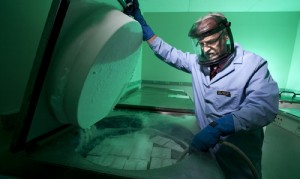 In a three-year, $1.5 million project, Foundation researchers are teaming with physicians at Baylor College of Medicine to create the first comprehensive repository of human prostate cancer tumor cell lines and xenografts. The cell lines and grafts will represent all prostate cancer subtypes and prognoses; from primaries to metastases, indolent to aggressive. The project team are making the materials available to the worldwide scientific community, which will spark new research into the causes and treatment of the disease.

The project is similar to the Foundation’s role establishing the first breast cancer tumor cell lines 35 years ago, which led to collaboration with Dr. Dennis Slamon resulting in the development of Herceptin®, an effective anticancer drug against certain aggressive breast cancers. Today more than half of all breast cancer tumor cells used around the world originated in the Stehlin lab. 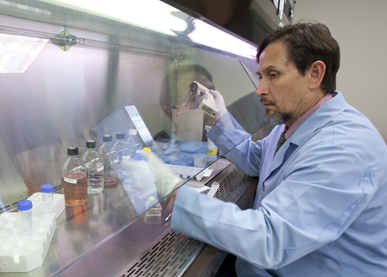 lines are being developed by Stehlin scientists from tumor tissue samples harvested by Baylor physicians during prostatectomies or metastatic lesion biopsies. As more tumor xenografts and cell lines are established, researchers can better describe the defining characteristics of the disease, both as a whole and within each subclass of tumors.

The project is multi-disciplinary, requiring data from and providing it to all parts of the prostate cancer landscape. Its goal is to translate findings quickly and efficiently “from research bench to bedside,” or from laboratory experiments through clinical trials to actual point-of-care patient applications.

The lifetime risk of a prostate cancer diagnosis to an American male is about 1 in 6. Incidence has been increasing over the last few decades, largely due to improved detection procedures. It is a major health concern in elderly men. The aggressive form of prostate cancer seems to strike increasingly with age, with men 75 and older accounting for 48 percent of cases of metastatic disease and 53 percent of prostate cancer deaths. No effective cure exists for men with advanced disease.

In 2008 in the United States, there were approximately

2.3 million men alive with a history of the disease.  Since less than 10 percent of prostate cancer diagnoses are made in men aged 54 years or younger, the disease is more common in the U.S. and other countries with higher proportions of men with longer average lifespans.

Grants in support of the project are being sought from private foundations and individual donors. If you are interested in supporting the project, please contact the development office at 713-659-1336.

The Stehlin Foundation performed critical testing on the earliest versions of Herceptin, an antibody that has proven effective in treating certain aggressive breast cancers. More recently, Stehlin researchers began a study on the effectiveness of treatments combining Herceptin with camptothecin on patients to prevent recurrence in post-surgical breast cancers.