You are here: Home » Reasons for Hope » Achievements and Milestones 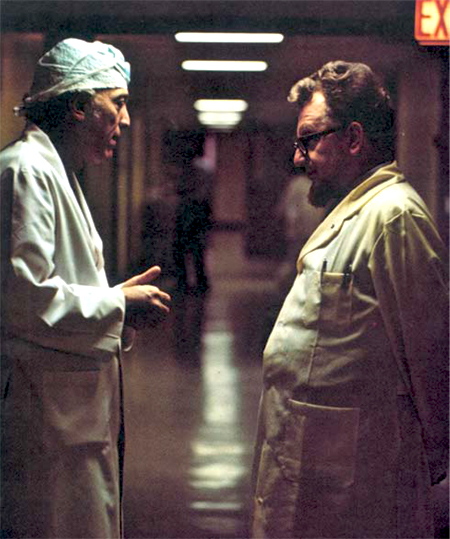 Fresh from the University of Wisconsin, the new laboratory director at the Stehlin Foundation for Cancer Research conducted the Foundation’s first experiment in May 1970 in a converted space next to the maternity ward at St. Joseph Hospital in Houston, Texas.

The rest, as they say, is history. Starting with a small staff and humble surroundings, CHRISTUS Stehlin Foundation has had a major impact in the fight against cancer. Here are just some of the highlights:

1970:  Lab Director Dr. Beppino Giovanella pioneers the development and use of the “nude mouse,” an immuno-suppressed type specifically suited to testing anticancer drugs.  Stehlin researchers established that when an anticancer drug is effective against a human tumor implanted in the nude mouse, in 85 percent of the cases the drug also is effective in treating the patient from whom the tumor was removed. The nude mouse is now the final nonhuman study model required by the National Cancer Institute (NCI) to determine the potential effectiveness of anticancer drugs. Many scientists consider the nude mouse one of the 20th century’s most significant breakthroughs in cancer research.

1973:  NCI selects the Stehlin Foundation to build the first cell library of primary breast cancer tumors. Today, more than 50 percent of the xenografts used throughout the world for breast cancer research come from originals established in Stehlin labs.

1973: Foundation researchers are the first to publish the selective sensitivity of cancer cells to heat. As a result of this research, numerous institutions throughout the world begin investigating the effects of heat on cancer.

1979: The Foundation publishes the results of the first study showing that the less radical procedure of lumpectomy with radiation offers survival rates equal to those of radical mastectomy, without mutilation and severe psychological consequences. A second, larger study validating these results is published in 1987.

1980: Among the first to recognize the importance of addressing patients’ psychological as well as physical needs, the Foundation’s Living Room at St Joseph Hospital in Houston becomes a prototype for cancer centers around the world.

1980: Outstanding high school and college students who want to pursue careers in science or medicine begin work in the Stehlin lab. Students work with renowned research scientists and physicians and are paid for their work. The program earns accolades from participating schools and students.

1987: The Stehlin Foundation is asked by Dr. Dennis Slamon at UCLA and Genentech, a biotechnology firm, to perform the critical testing on the earliest versions of Herceptin, an antibody that has proven effective in treating certain aggressive breast cancers.

1987: Scientists from Johns Hopkins and New York Universities approach Foundation scientists regarding collaborative studies on the camptothecin families of drugs.

1988: The Foundation publishes one of the largest studies of liver cancer ever conducted by a single institution, involving 414 patients.

1989: The first paper published by Dr. Giovanella and Stehlin staff in Science magazine shows the effectiveness of camptothecin, an anticancer drug derived from a native Chinese tree, against colorectal cancer, one of the most resistant cancers to treatment.

1990: Lumpectomy recognized as “treatment of choice” by National Cancer Institute panel. In 1970, Dr. Stehlin was met with bitter criticism for recommending a non-radical, less mutilating treatment for his patients with breast cancer. After Dr. Stehlin publishes treatment methods and results in 1979 and 1987, his approach finally is affirmed by a panel of NCI experts.

1995: The Foundation wins federal approval to start clinical human trials with 9-Nitrocamptothecin (9NC) for the treatment of cancers of the pancreas. In 2011 two patients treated with 9NC for incurable pancreatic cancer were alive after 16 and 14 years, respectively.

2003: Dr. Joachim Liehr, a Stehlin researcher, receives national attention for his groundbreaking work on the complex link between estrogen and cancer.

2005: Stehlin researchers begin animal tumor screening of nine new camptothecin derivatives that emerged as the most active from the tissue culture screening of more than 200 new compounds synthesized in the Stehlin laboratory

2007: Foundation researchers begin a study on the effectiveness of treatments combining Herceptin (see 1987) with camptothecin on patients to prevent recurrence in post-surgical breast cancers.

2008:  The Foundation’s application to the FDA for camptothecin derivative CZ48 is approved. Phase I clinical testing of CZ48 on humans begins at the University of New Mexico Cancer Center at Albuquerque. In 2010, CZ48 Phase I drug trials are expanded to the University of Texas Health Science Center in San Antonio.

2009:  Development of synthetic derivatives of camptothecin and other anticancer compounds continues.

2009:  CZ48 research continues, with work on improving absorption and distribution, and on the drug’s metabolism and pharmacokinetics.

2010:  Investigations continue into improving the absorption of the camptothecin compound CZ48 by either micronization or hot melt extrusion techniques.

2010: Research expands on the effects of hyperthermia (heat) on cancer cells

2011:  Foundation launches a new program to create a comprehensive library of prostate cancer cell lines and xenografts. Baylor College of Medicine physicians will collect the tumor specimens used in the project, which will lead to new therapeutic strategies to fight the disease. Prostate cancer represents fully one-third of all newly diagnosed malignancies in American men.

2011: Aetna Insurance Company publishes a clinical policy bulletin indicating that hyperthermic perfusion is considered “medically necessary” for the treatment of advanced melanoma of the extremeties. The release further validates research published by the Foundation in 1975 and more than two decades of hyperthermic treatment by Dr. Stehlin.

A new study suggests that sometimes simply watching and waiting is a safe alternative to surgery for older patients with small kidney tumors. A surgical oncologist said that the findings, "should allow clinicians and patients to feel more comfortable about surveillance, particularly for the 'oldest old' and those patients with multiple [other health conditions] that would make surgery especially high risk." >> Click on article title for more.