You are here: Home » Our Team » The Friends of the Stehlin Foundation

The Friends of the Stehlin Foundation is an independent tax-exempt charitable organization whose sole purpose is to raise funds to support the Foundation’s cancer research, treatment, and education programs.

However, the word “friends” doesn’t seem adequate for this high profile, high energy, and tirelessly dedicated group and their passionate support of cancer research. Through their annual galas, The Friends have donated more than $12 million in support of the Foundation’s fight against cancer.

The Friends was formed in 1980 when Mike Meagher, a frequent tennis partner of Dr. Stehlin and individual supporter of the Foundation, attended a particularly fun charity event.  Mike later said, “John, we should do something like that for your group.” And so Mike did. The first Friends Gala was held a 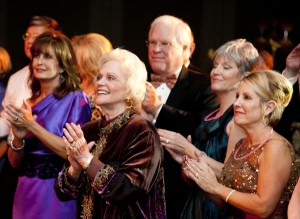 Within a short time the evening had become a “must attend” event in Houston. Today, proceeds from Friends galas represent a significant portion of the Foundation’s annual operating revenues and a critically important contribution to the battle against cancer.