You are here: Home » About the Foundation » Founder Profile 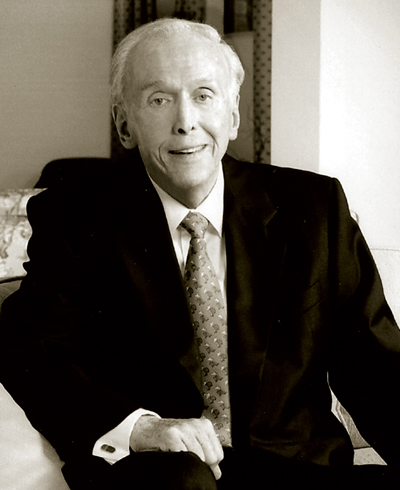 In 1969, armed with only $6,700, a dream, and a fierce determination to improve treatments for cancer patients, Dr. John S. Stehlin, Jr. founded the Stehlin Foundation for Cancer Research. He based the Foundation on a new concept of cancer treatment: a tri-partnership joining the patient, physician, and research scientist in a shared fight against cancer, resulting in the logo that has been with the Foundation since its beginning.

A native of  Brownsville, Tennessee, Dr. Stehlin attended Notre Dame University and in 1947, graduated from the Medical College of Wisconsin. His postgraduate training took place in Memphis, Milwaukee, and Boston before he assumed teaching and surgical positions with the M.D. Anderson Hospital and Tumor Institute in Houston in the mid 1950’s. During that training, John also served in the U.S. Air Force, and by 1955 had attained the rank of Captain. Dr. Stehlin retired from clinical practice in 2002 to focus on his important and consuming work with the Foundation.

“There’s No Such Thing as a Hopeless Cancer Patient”

Throughout his career, Stehlin was a progressive and compassionate physician.  In 1970, he was one of only two surgical oncologists in North America to recommend conservative treatment of selected breast cancer patients with a combination of partial mastectomy (lumpectomy) and immediate reconstruction, followed by radiotherapy. He also was the first to combine heat (hyperthermia) and chemotherapy for the treatment of advanced melanoma of the arms and legs, resulting in a 300 percent increase in survival rates and virtually eliminating the need for amputation. John was also a leader in the development of regional intra-arterial chemotherapy, in which large concentrations of anticancer drugs can be delivered directly to specific organs or areas of the body where tumors are present.

Dr. Stehlin’s focus on the psychological, spiritual and emotional health of his cancer patients was unusual, even radical, for the time. As Norman Cousins wrote in the September 1981 issue of Family Circle, “Stehlin instills his patients with a strong will to live, a confident attitude, and a belief that their treatment will work. A patient filled with hope, joy, and laughter is a better candidate for successful surgery.”

As important as the treatment of cancer was to Dr. Stehlin, he was an equally imaginative and innovative researcher. John authored or co-authored 95 major scientific papers, and has been the progenitor of major breakthroughs in cancer treatment.

In 1973, Dr. Stehlin teamed with Dr. Peter D. de Ipolyi to form the Stehlin & de Ipolyi Oncology Clinic. Through this relationship, innovative research and treatment methods developed in the research laboratory were often utilized by physicians in the treatment of patients with cancer.

But perhaps John’s most enduring legacy is his partnership with Laboratory Director Dr. Beppino Giovanella in the development of the promising new anticancer drug family, the camptothecins. Having pioneered camptothecin research in the late 1980’s, Stehlin scientists developed several synthetic derivatives that exhibited remarkable effects on a variety of tumors combined with extremely low toxicity.

One compound, CZ48, is currently in Phase I clinical trials in humans. CZ48 has the potential to be a dream fulfilled for Dr. Stehlin – a drug that will be an effective new treatment for a variety of cancers, reducing or eliminating the disease’s devastating effects.

Read Dr. Stehlin’s letter to Foundation supporters upon his retirement from clinical practice in 2002.