You are here: Home » Reasons for Hope » Current Projects » Development of an Improved Mouse Model

Development of an Improved Mouse Model

Will Predict Human Response to Anticancer Drugs with Greater Accuracy

Scientists at the CHRISTUS Stehlin Foundation will be among the first to perform pharmacological experiments on newly-developed “humanized” mice with livers 50-100 percent compatible with those of human beings. The Foundation has been collaborating with scientists at the Oregon Health & Science University team on this important breakthrough.

The liver compatibility is significant, because up to 90 percent of the metabolism of cancer drugs occurs in the liver. Until now, immuno-suppresssed mice were only a partial match, and tests of chemotherapeutic agents’ efficacy and toxicity did not translate their data to the human patient very well.

The target of the chemotherapy is a human tumor xenografted onto the mouse, while the main sites for drug metabolism and toxicity are the mouse’s liver and bone marrow, respectively. Those tissues are murine (mouse) and do not respond to chemotherapy in the same way as human tissues. The goal of this study is to create and validate a xenograft mouse model that includes a mechanism for testing drug toxicity and metabolism more closely related to humans. By allowing more accurate testing of new cancer treatments, the new model will revolutionize testing of new chemotherapeutic agents and reduce the chance of failure in human clinical trials. 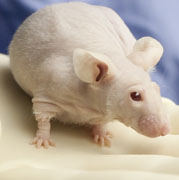 Stehlin Foundation researchers developed the “Nude Mouse,” an immuno-suppressed species specifically suited to testing for all anticancer drugs. The Nude Mouse is now the final nonhuman study required by the National Cancer Institute.